Blue Moons: What Do they Represent Spiritually? 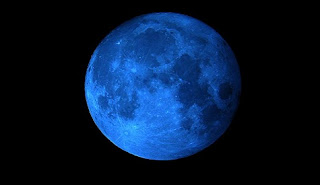 It doesn’t happen very often. About once every 2.5 years. But when a single month displays two full moons within its span of days, the second full moon is known as the Blue Moon. The phrase doesn’t really signify the color of the moon, but rather it’s rare occurrence. Although the moon can take on a blue hue from atmospheric interference. The ash and soot from a volcanic eruption or wild fire can distort the atmosphere enough to cause the moon to look blue. Historically full moons have been given names for eons. Depending on culture and location, ancient people named their moons in accordance with the season or activities of that time of the year.

It is generally believed that in the construct of Folklore, a moon that came too early had no name, and was called a blue moon, retaining the correct seasonal timings for future moons.
The idea is reported by The Farmers’ Almanac who define a blue moon as an extra full moon that occurred in a season. One season normally displays three full moon cycles. If a season had four full moons, then the extra full moon was named a blue moon.


Another interpretation uses another Middle English meaning of belewe, which (besides the color or emotion of being “blue”) can mean “betray”. By the 18th century, before the Gregorian calendar computus was out of sync with the actual seasons and the moon, ..spring would [occasionally] have begun before the computus put the first spring moon [in its proper place].
Thus, the clergy needed to tell the people whether the full moon was the Easter moon or a false one, which they may have called a “betrayer moon” (belewe moon). [If there was an additional moon] people would have had to continue fasting for another month in accordance with the season of Lent.

The earliest recorded English usage of the term “blue moon” was in a 1524 pamphlet violently attacking the English clergy, entitled “Rede Me and Be Not Wrothe”.

Even if you swap out some of the questionable translations you’re still left with the same general meaning. Blue or Betrayer the poem still fits the issue of when/where the extra full moon is placed in spring. It took a little over 300 years for the idea of a “blue moon” to evolve into the common phrase we know today. The betrayer fell by the wayside and the rarity finally took precedence. By the early 1900s the phrase had crossed through Europe and over the Atlantic to the United States to relate to absurdities and impossibilities of something occurring. The phrase “once in a blue moon” finally became a common statement that refers to an event that will take place on very rare occasions.

The origins behind the meaning of a Blue Moon vary. And the tales or origins; of these meanings cannot be substantiated. However, some believe this rare extra full moon holds the knowledge of the Grandmother Goddess (or the Crone) and therefore contains the wisdom of the 3-fold energy. This can be associated with the Goddess in her 3 forms of Maiden, Mother, Crone.  It can also be associated with the 3 natures of self as Mind, Body, Spirit. In later evolutions as paganism began to be influenced by Christianity, this moon was associated with the Divine Trinity of Father, Son and Holy Spirit.

Another view is that the Blue Moon represents a time of heightened or clearer communication between our physical being and the higher levels of Divine knowledge or energy. It can also be viewed as providing a stronger link between the physical (masculine energy) and the spiritual (feminine energy) within the self.
These links to higher Divine knowledge and higher or heightened connections between the physical and spiritual bodies make communication with spirit easier. Individuals are more apt to yield insightful and enlightened information that can be applied to their physical and spiritual paths during this special full moon phase. Because of this, a blue moon event in the world of Pagan Metaphysics is a very special event that is honored with great reverence.

Whether you hold a private ritual or one in a group, the first steps should be preparing yourself for the ceremony. Begin with taking a cleansing shower or bath. The idea of this step is to relax and cleanse the body and the mind, by washing away the stress and anxiety of the day. In this situation, the water becomes a representation of flowing energy that cleanses the worry from the mind, and effects of the world upon your physical body. It helps to visual the water flowing over your body washing it clean, and through the inside of your body from head to toe, washing away the unwanted energy from mind and spirit.  You may also want to incorporate aromatherapy into your spiritual bath.  Be mindful of the scents for this season which is summer so grapefruit, rose, blue cypress, ginger, chamomile, and fennel are a few that would be great to add. 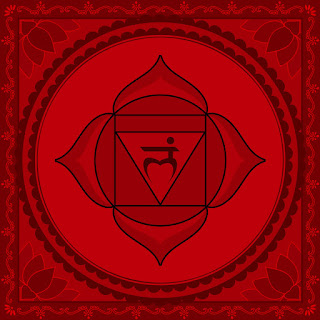 Getting to the Root: Root Chakra Healing Tattoo